How to make cured fat 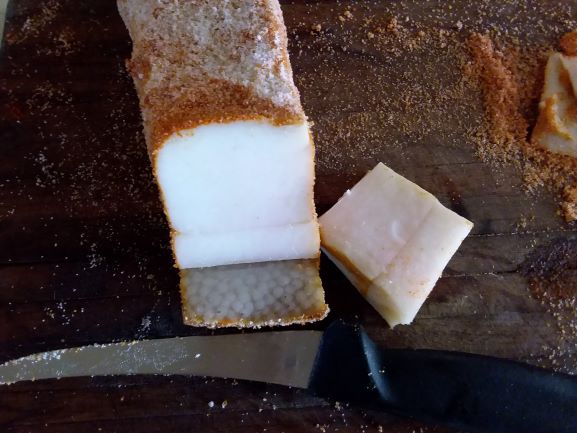 It’s gotten a bad rap in the last several decades.

At one point in  our human history, being fat was beautiful (still is in some cultures). Eating fat was prized. Fat was equated with wealth.

And, that’s probably closer to the truth than the “low fat is healthy” myth being perpetuated on humanity right now.

Mangalitsa pigs produce a lot of fat, and they have been bred to produce premium quality lard.  That’s the genetics. How that expresses depends on how you raise them.  Good quality, good keeping fat is produced when the animals are:

In pigs, all fat is lard. It doesn’t get differentiated based on if it’s raw or rendered out.  We store our pigs’ lard in two forms: rendered (heat treated to separate the fat, water, and protein) and cured.

Here’s the video instruction for making lard. The essence is to heat and hold the fat at 225 degrees (give or take a few) in a surround-heat environment (crock pot, oven, double boiler, etc.), starting with pieces that have as much surface area as possible to get a good render (either chips or ground through the large die of a grinder). The water will bubble up, looking like the fat is boiling when you gently stir it.  It’s done when few, or no, bubble rise, the fat is clear, and the protein pieces have sunk to the bottom. Pour off the fat through a cheesecloth in a stainless steel strainer and put into containers.

The other really cool way we store the fat is as “lardo.” Lardo is simply large pieces of the fat from the back stored in salt.  It’s really that simple. And it’s the simplest cured product to make.  Here’s how:

It’s that simple. You can put spices on the fat before putting it in the salt. Favorites are paprika, black pepper, rosemary, juniper, garlic. Your imagination is the limiting factor. Here’s a video on how we do it.

For more information, consider joining us for an on farm class. We also host a weekly LIVE Q&A show on youtube every Wednesday at 8 pm EST. Come join us with your question and get answers in real time: The Anyone Can Farm Experience YouTube channel